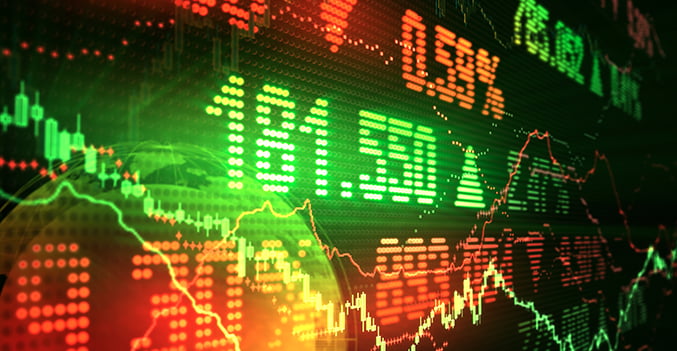 What is extended hours trading?

Extended hours trading are time intervals outside of regular trading hours where trading still takes place. Volume is usually inconsequential and the vast majority of time, nothing of significance takes place. They’re simply available for convenience and the ability to react when that rare catalyst strikes.

Although conventional wisdom tells you that the stock market opens at 9:30 AM EST, you can actually trade as early as 6 AM. Though, many retail brokers only allow pre-market trading starting at 7 or 8 AM. After market hours starts as soon as the market closes at 4 PM, and goes until 8 PM. Again, many brokers cut off their extended hours at around 6:30 PM. It varies from broker to broker, so make sure you consult with your broker if you plan to trade during these hours. 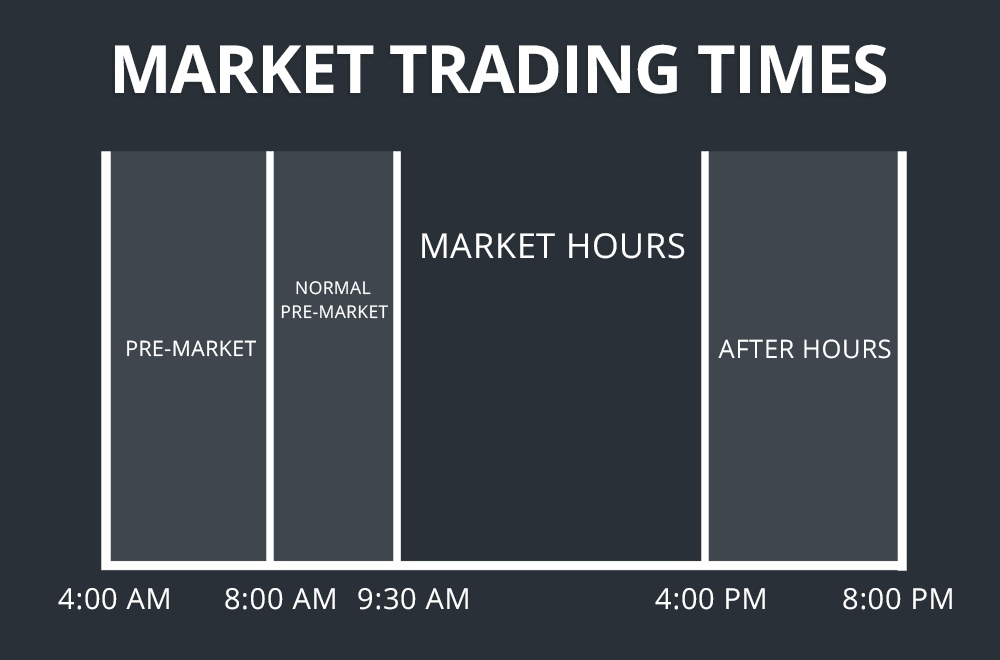 Why does extended hours trading exist?

Extended hours trading became a necessity as financial markets became globalized and the world became more interconnected. The rest of the world does not live on United States Eastern Time and a lot happens outside of regular market hours. Extended hours give traders a chance to react to these events in real time.

The main benefit of extended trading hours is the fact that earnings reports and calls are done during pre-market and after hours trading. Extended hours gives traders a chance to speculate on earnings in real time, and even trade in reaction to statements made by executives on the earnings call.

There was a time, not so long ago, that extended hours trading was restricted to all but institutional investors and a select few high net worth investors. The advent of electronic trading has granted the opportunity to all investors to trade during extended hours, for better or worse.

That being said, to this day it is still a very difficult endeavor and advised against save for specific situations. Here are a few reasons it’s not recommended that you trade during extended hours:

Most retail brokers do not allow you to interact with the same liquidity that you do during regular trading hours. Typically, they will route it through their in-house market maker, or have a very select few ECNs. You may have seen this in action if you had an order sitting on the book after-hours and saw multiple orders executed at worse prices than yours, yet your order is still untouched.

Liquidity is perhaps the most important aspect to trading. You can have billions in unrealized profits but if there’s nobody to take the other side of your trade, you may as well have nothing. Unless there is a catalyst like earnings or breaking news, most stocks trade very thinly during extended hours and you can’t quickly move in and out of them.

During the average stock’s extended hours session, the price trades in an extremely narrow range with no real direction to the price movement. Generally, the best that one can hope for is a scalp, which is like betting three for a possibility of one. Factoring in transaction costs and the illiquidity of extended hours trading, attempting to scalp is a negative expectancy game.

Nowadays, save for micro and small cap stocks, most spreads are a penny wide. We’ve gotten so greedy with these liquid markets that we think paying the bid/ask spread isn’t a thing to fret about. That is, until you look at extended hours quotes. Welcome back, 50 cent spreads.

It’s not the highest and best use of your capital

It’s amazing how some traders are willing to use so much of their capital for such small returns in shoddy trade ideas. Just wait until tomorrow, there will be thousands of highly liquid stocks with directional price movement. Why mess around with illiquid, range-bound stocks? Insisting on trading in illiquid extended hours markets is akin to a trader being emotionally attached to trading the stock of his favorite company. 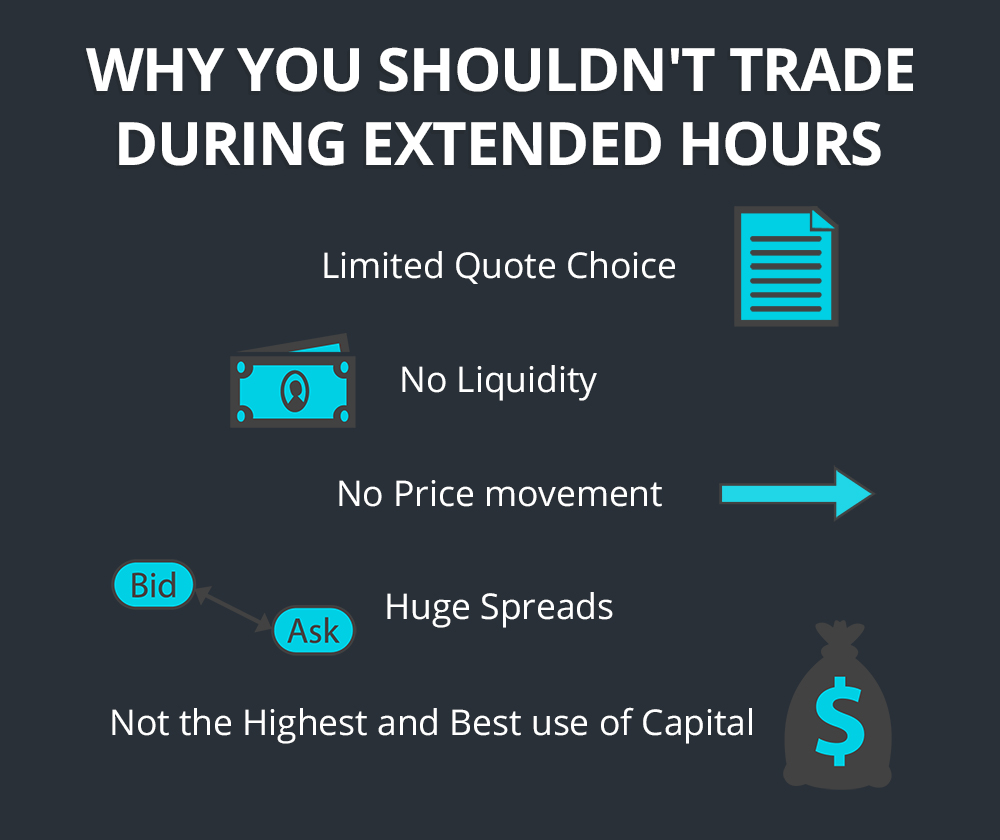 With that being said, sometimes there is legitimate reason to trade during extended hours if the proper precautions are taken. There are various situations that would lead to an extended hours catalyst. Here is an outline of the most typical:

By far the most common, almost every stock market earnings report takes place during extended hours. These reports often lead to extreme volatility as they are viewed by many as somewhat binary in nature. “Good or bad” is the prevailing question. Statements by the company’s executives during the call are being received as bullish for some, bearish for others. Earnings are a favorite for sentiment traders.

When a company announces a deal to acquire another company, any stocks involved in the deal are going to see considerable activity. An example is Intel’s acquisition of Mobileye. It was announced in pre-market, and the stock jumped from the 40s to the 60s.

A rumor in the higher end of the financial media holds a lot of weight. An article in the Motley Fool means little, but when CNBC and Bloomberg are talking about it, price will react accordingly. Rumors are regularly announced during extended hours. Consider the situation with the stock of TV subscription service Starz, and their extended hours acquisition rumor.

Whether a fund manager like Bill Ackman or Jim Chanos is announcing their next big short, or a company’s CEO is arrested, all types of crazy things happen during extended hours.

During pre-market, there are always stocks gapping up and this is a part of many traders’ strategies. If you have a robust gap trading system, then it would be appropriate to trade gaps during extended hours. However, if this is not your bread and butter, steer clear. 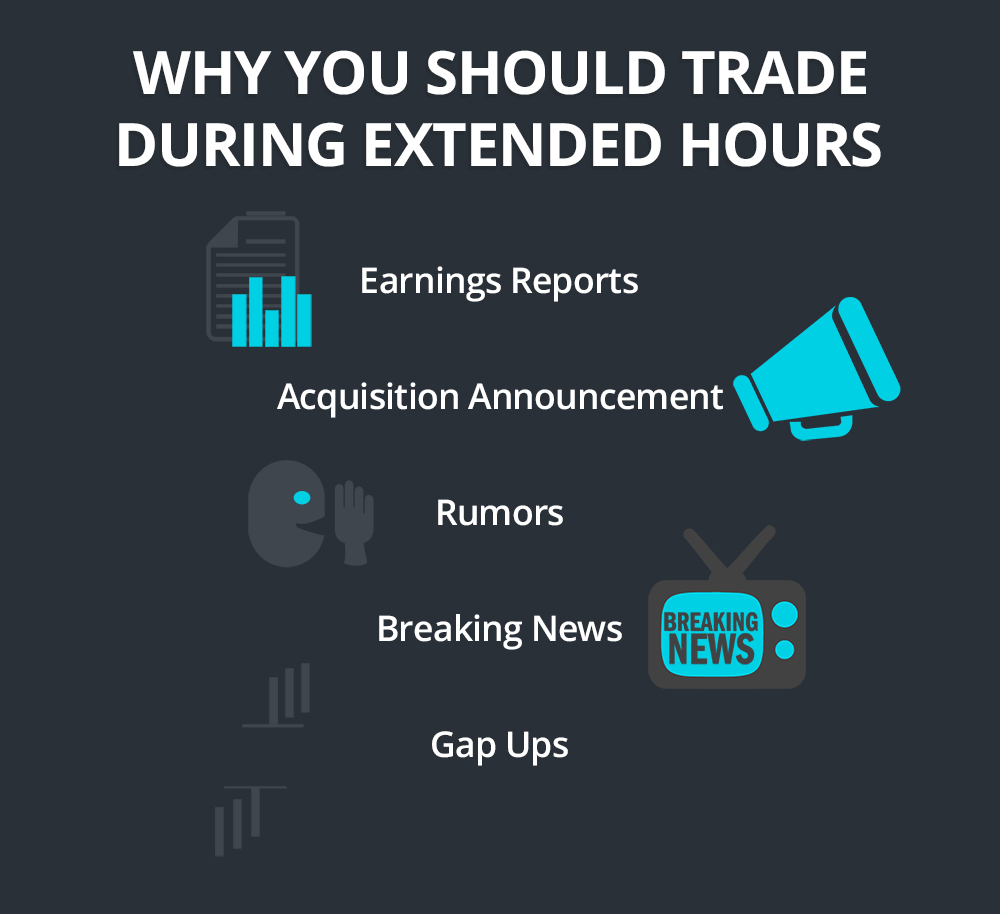 Here are a few best practices if you decide to take extended hours trades:

Never trade during extended hours unless there is a catalyst justifying so. Even if the stock is moving, if you don’t know why, stay away from it. Whether its earnings, news, or Jim Cramer pumping the stock on Mad Money, know why you are trading the stock. From a day trading perspective, this is unusual, as day traders generally know little about the stocks they trade. Extended hours is a different beast altogether.

There must be liquidity

You must be able to swiftly trade in and out of the market without considerable slippage. If this is not achievable, stay away.

If you are accumulating or adding to a position for a longer term swing trade, extended hours orders are okay. Try to resist the temptation to move your order around. Set an order and forget about it. The choppiness of extended hours will lead you to buying at an unreasonable price if you chase.