A Comprehensive Guide to PSAR 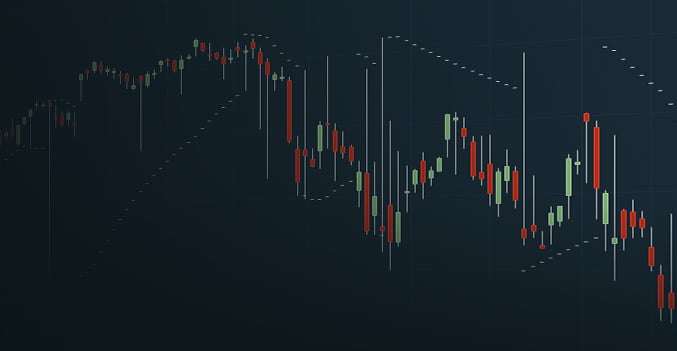 The Parabolic Stop-and-Reverse (PSAR) indicator places a set of dots on a chart in order to highlight whether a stock is trending up or down and to indicate when a price trend breaks ahead of a potential reversal. PSAR was developed by Welles Wilder in 1978 and has remained popular among traders ever since as a tool for identifying price trends as well as potential entry and exit points. When used in combination with other indicators to confirm potential reversals, PSAR can be a powerful indicator for trading trending stocks. 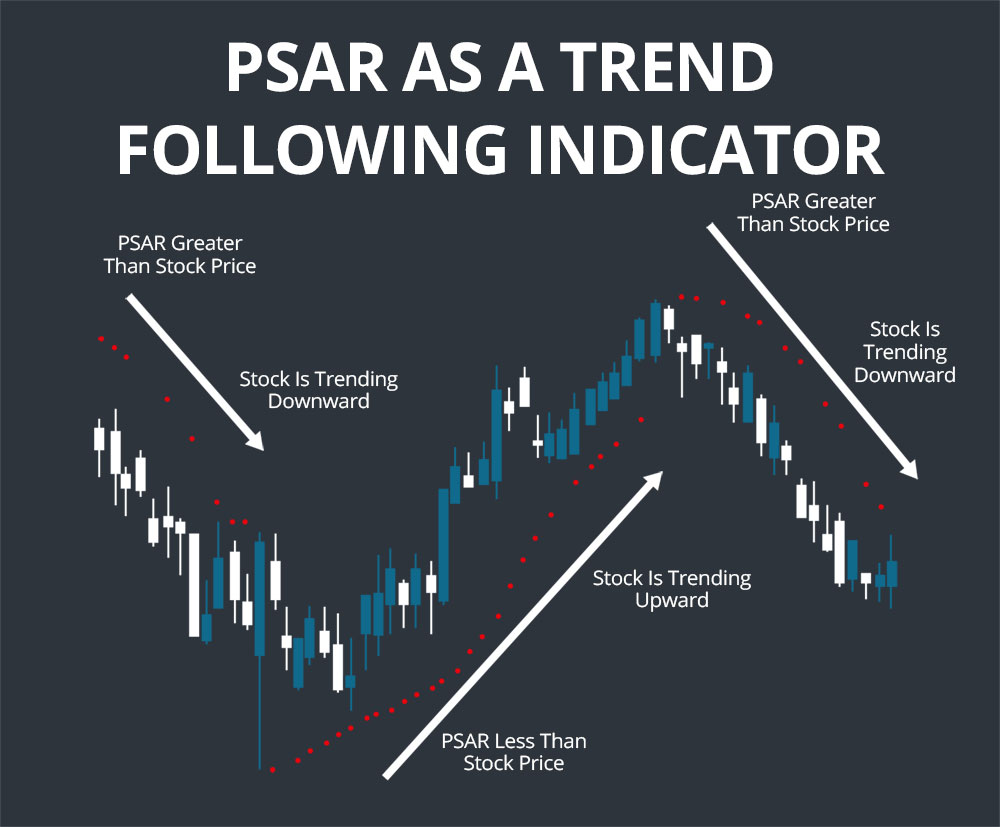 PSAR is particularly difficult to calculate by hand because it depends on whether the value of PSAR itself is rising or falling and includes an acceleration factor that changes with each time interval in the current trend. The acceleration factor is an important component in calculating PSAR – typically, it is initialized with a value of 0.02 and increases by a value of 0.02 every time the stock price reaches a new highest high or lowest low in the current trend up to a maximum value of 0.20.

If the stock price, and consequently PSAR, is trending upward, PSAR is calculated by subtracting the last time period’s PSAR from the highest high in the uptrend, multiplying that value by the acceleration factor, and then adding the result to the previous period’s PSAR. Thus:

If the stock price and PSAR are trending downward, the calculation for PSAR is somewhat different. To calculate PSAR, subtract the lowest low of the current downtrend from the previous time period’s PSAR (the opposite of the subtraction for an uptrend), multiply the result by the acceleration factor, and add this to the previous PSAR. Thus: 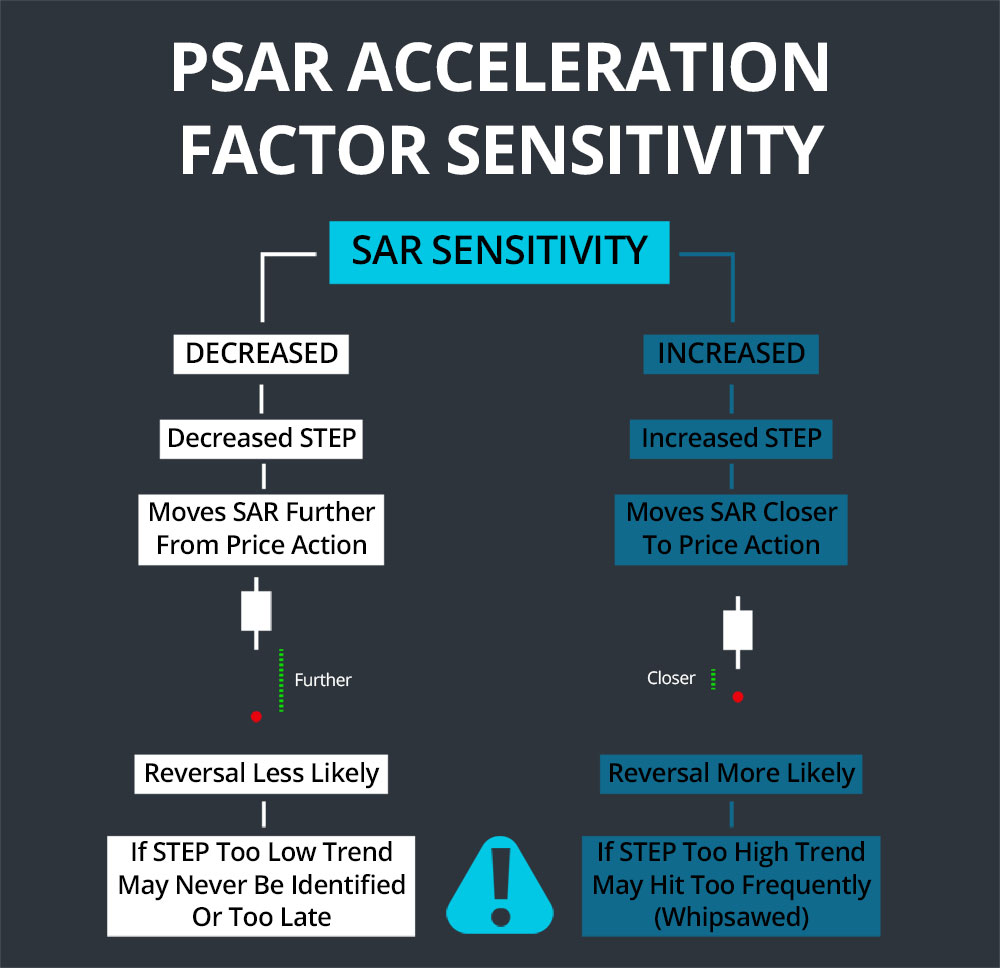 How to Trade Using PSAR 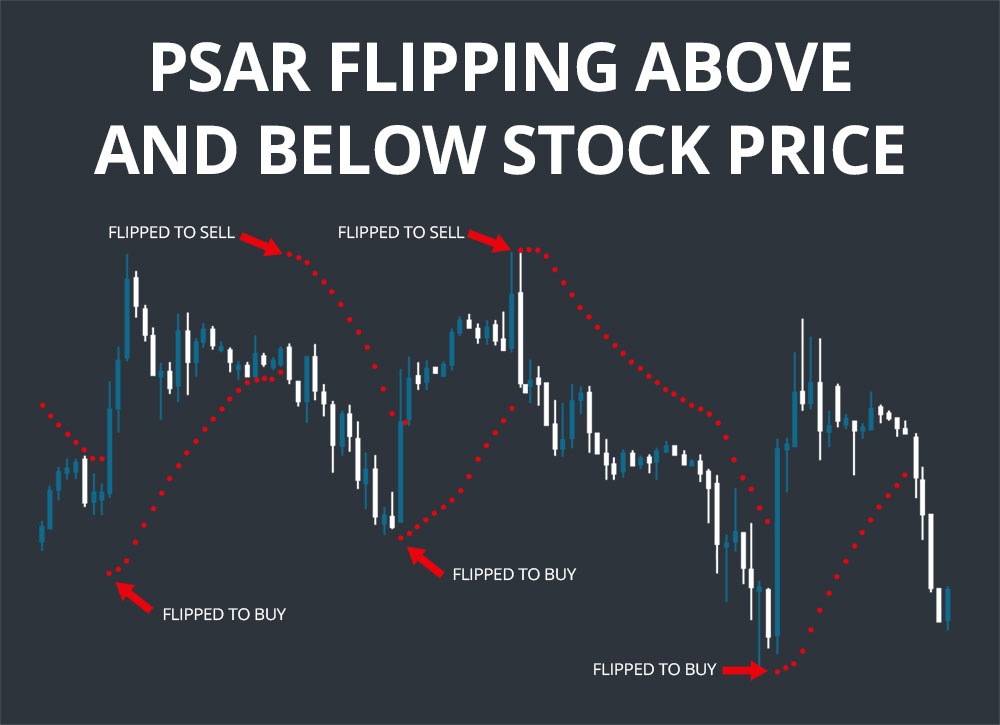 When trading with PSAR, the most important thing to remember is that it is only effective as a buy and sell indicator for swing trading when a stock is trending strongly. In a sideways market, PSAR will flip above and below the stock price repeatedly and it may be difficult to identify true signals without using additional indicators such as MACD, RSI, moving averages, and others. A PSAR breakout is much more convincing when, for example, a stock is considered oversold by RSI or is valued below a long-term moving average. Trendlines and moving averages can also help to determine when a strong trend is present as opposed to highly volatile or sideways price action, and manipulating the calculation of PSAR using the acceleration factor as described above can help to minimize fall signals.

One of the best and most popular uses of PSAR is to set stop losses during a trend. As the price of a stock trends upward, it is important to protect profits by continuously adjusting stop losses upward. The PSAR represents a choice value for stop losses at the end of each time interval since if the price breaks below the PSAR it is likely indicating a reversal and the PSAR will flip from below to above the stock price accordingly. For downtrending stocks, PSAR can also be used to protect profits when short-selling by similarly setting the PSAR as an exit point if the price of the stock exceeds its value. 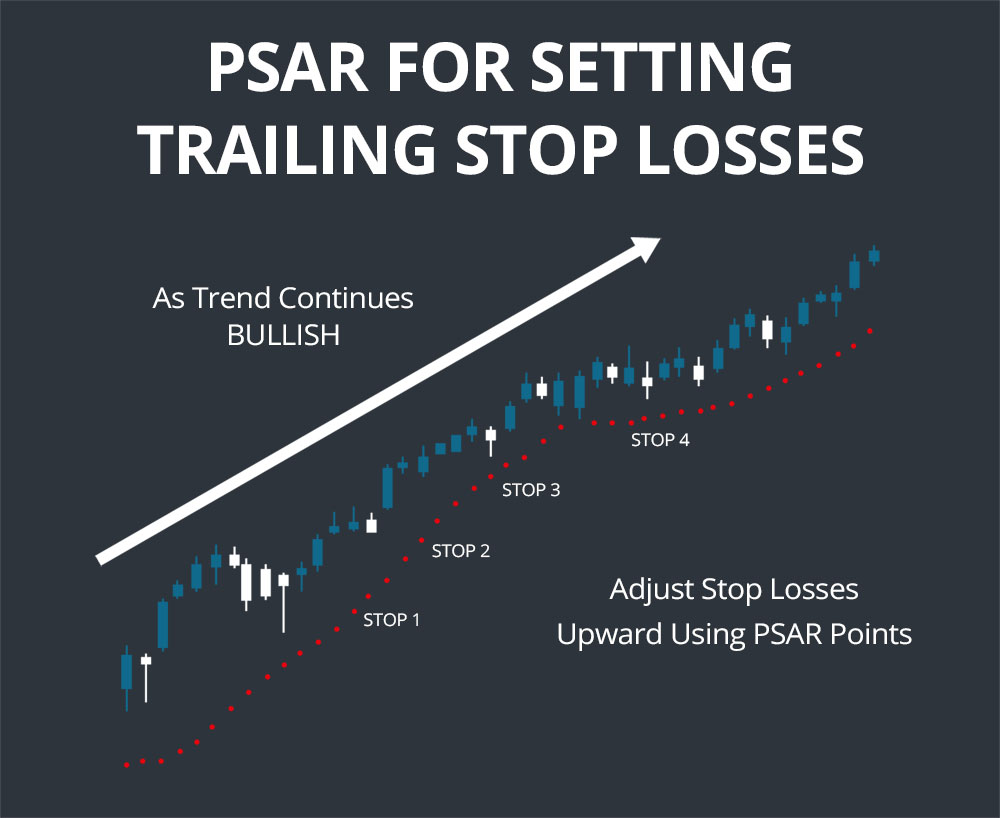 The PSAR is most similar to the MACD in that they are both trend following indicators and both can indicate a potential reversal – PSAR by flipping from below to above the stock price or vice versa, and MACD by exhibiting a signal line crossover. MACD can also, like PSAR, give information about the direction of a price trend based on whether its value is positive or negative. However, MACD does not provide price information that can be used to set stop losses or profit protections in the same way that PSAR does.

The first example shows the power of PSAR to be used both for indicating reversals and for setting trailing stops. Both reversals on the chart are captured accurately by PSAR since this stock is trending strongly over the period in question. Notably, the second, larger reversal is also signaled by a signal line crossover in the MACD chart to confirm the exit signal from PSAR. Most important, traders who are using PSAR to set trailing stop-losses while following the two uptrends would have been rewarded – these stop losses would have protected the bulk of profits from following the uptrends, whereas leaving stop losses at levels near the start of the uptrends would have negated nearly all profits. 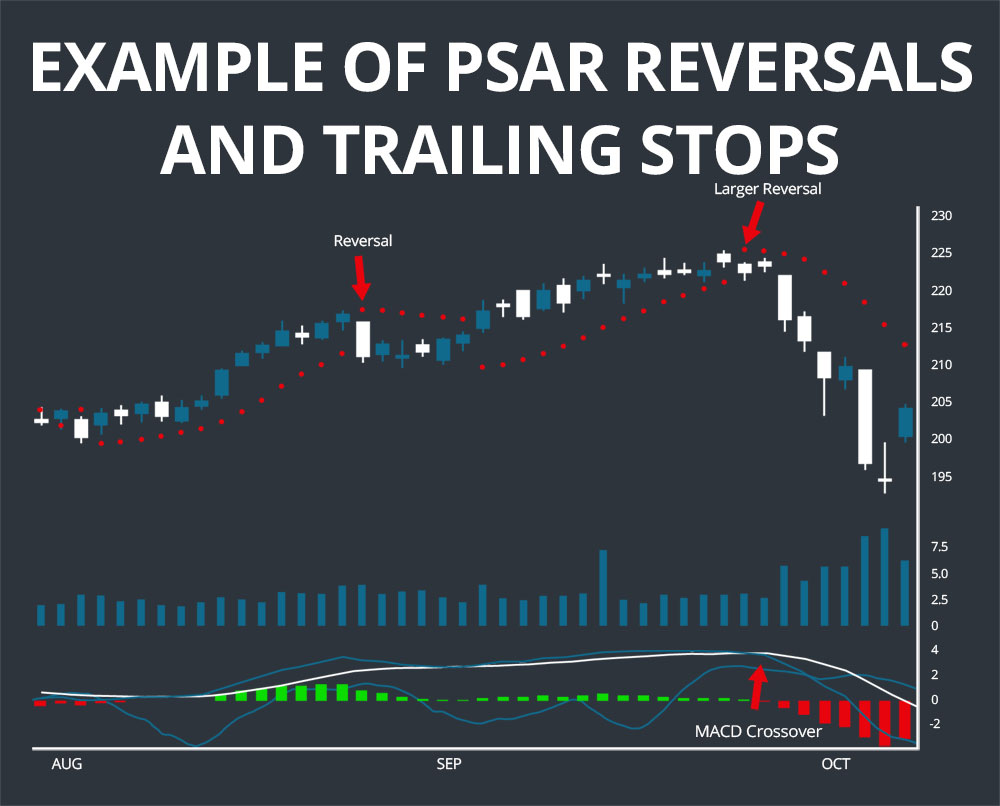 The second example shows a situation in which PSAR is not nearly as effective and must be interpreted with caution – volatile, sideways price action. In the absence of strong trends, PSAR values may flip erroneously and the price trends indicated by PSAR may be unfounded. There are numerous examples in this chart (a few are noted) where trading on PSAR alone would lead to s. In this situation, it is possible to desensitize PSAR by lowering the acceleration factor step, although PSAR is in general not the indicator of choice for trading during periods of sideways price action. 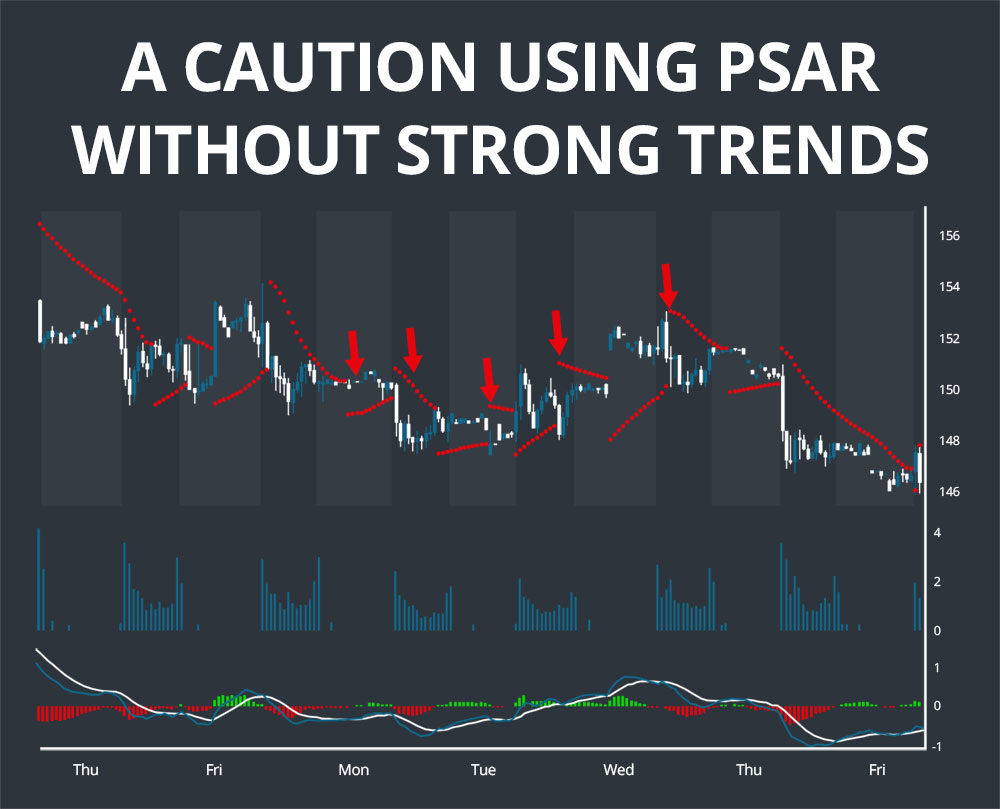 PSAR is a popular and useful indicator for identifying the direction of a price trend and potential entry and exit points as well as for setting trailing stops to protect profits. Although PSAR does not perform well during volatile or sideways price action, it can be paired with other indicators, including RSI, MACD, and moving averages, to confirm a trend or reversal. In addition, it is possible to manipulate the acceleration factor at the heart of PSAR to make it more or less sensitive to price action depending on the strength of a trend.